Yes to this Dress!

Antonia started supporting Lucy the first day she moved into her new home. She played a major role in getting to know Lucy as a person and figuring out how to best support her in her new life.  It was rocky at times as transitions like these often are but Antonia stuck with it through the ups and downs and demonstrated a compassionate commitment to supporting Lucy as she settled in.

In the late Fall of 2020, Antonia expressed interest in helping Lucy learn how to sew. Antonia makes most of her own clothing and shared with Lucy the many beautiful ensembles she had produced over time. As Lucy wished to learn this new skill, Antonia got to work teaching her the fundamentals of sewing. She carried the supplies with her, bringing them to each shift she worked. Lucy eagerly participated in the lessons, initially sewing onto a paper grocery bag that had a straight line drawn onto it - Antonia made this to help her learn technique and to allow her to practice. 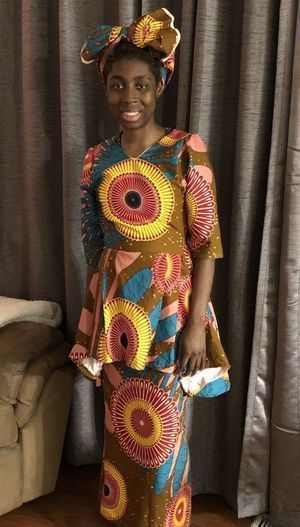 Then Antonia was suddenly called away to her native home of Nigeria to attend to a family emergency.  She was devastated and told Program Coordinator Maria she worried Lucy was making great progress on sewing and she will no longer be around to continue working on it with her.  On the evening of Antonia’s last shift, Lucy started sharing photos with the program team and her guardian.  She was so proud of the magnificent outfit and head piece created for, and with her.  Antonia said that she had been steadily working on the two-piece dress, but when she learned she may be gone for a while, she hurried to finish it.  It is more than a dress - it is a work of art, one that also beautifully displays with pride the cultural roots of both women's native homeland of Africa.

Lucy misses Antonia and asks about her frequently. PSRS is hoping Antonia will return and reunite with Lucy - she has made such a positive impact and there is more opportunity.  Antonia never intended to share this story - to her, she was simply teaching Lucy how to sew and working on a dress as she often does. To PSRS, this is a story about a special relationship, a woman who shared her talent and skill with an individual she supports, a direct support staff who spent her time on and off the clock creating a heartfelt gift, and the capacity for someone to go beyond the expectations of their job to bring about a meaningful and lasting connection.