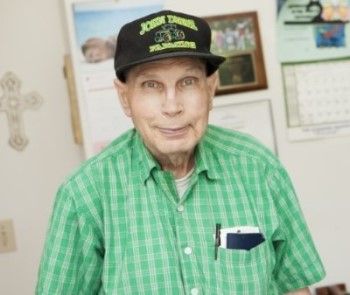 Born in Indiana, Clyde was just a boy when a blizzard forced his mother to pull off to the side of a road and wait for the storm to pass. Unfortunately, as they waited, another vehicle crashed into the back of their car, causing young Clyde to hit his head on the windshield. Following the accident, Clyde had seizures and other developmental issues related to his injuries. But one of the things that has stayed intact is his love of numbers–he remembers everyone’s birthday and can tell you exactly what amount of change he carries in his pocket.

While Clyde’s parents cared for him at home in Indiana, and later at their home in Yakima, Washington, as they aged they decided to place him in Rainier School (a rehabilitation center commonly referred to an institution), located in Buckley, WA. For the next 20 years, Clyde would call this institution home.

Shortly after PSRS began providing services, Clyde became one of the organization’s clients, and for the first time in his adult life, he entered his community. Clyde wasted no time: he joined a church two blocks from his new apartment and started a janitorial job at Boeing Field. This job lead to another job, which eventually earned him a full-time position with Boeing. His love for numbers served him well, as he diligently saved up enough money not only to pay his own rent, but to buy a condo.

Today, he is spending his retirement years in a 3-bedroom home that he purchased over 15 years ago. His niece is quick to point out that while she helped with the “mechanics of the purchase,” it is Clyde who is responsible for the hard work, the savings, and the decision to buy. PSRS partnership with Clyde has given him the opportunity to demonstrate his independence, and empowered him to make his own choices in life.

“I didn’t believe it then, but I see it now: families tend to overprotect. When Clyde first worked with PSRS, they said that he was responsible for his own cooking. I was upset, thinking, he can’t do that–what are they thinking? I came over to his apartment and was prepared to help him make dinner, when I saw the counter: lined up was the macaroni and cheese box and all of the ingredients. He had done this all by himself. It was a moment that has always stuck with me. It is amazing how much he has accomplished.”